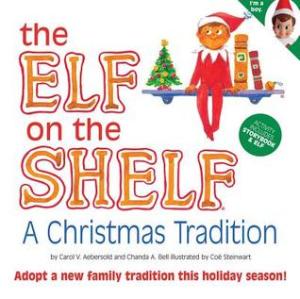 I avoided this book for a long time, not because I didn’t think it was a great idea, but because I didn’t want to read it to my kids and feel obligated to do something with the elf every night. I kept seeing all these pictures all over Facebook of crazy things people did to their family elves – dressing them up, staging tea parties, toilet papering Christmas trees – it was endless.

So last year after Christmas, I picked up an Elf on the Shelf kit for 50% off. When we pulled out our Christmas stuff this year, we found it, read it, named our elf Jingle Jack, and we’ve been having a blast ever since.

Now, my son is almost 8, and he’s been hesitant to believe Santa is real for the last year or two. However, he’s all about believing that Jingle Jack actually goes to the North Pole to report to Santa every night. He even caught me in the act of staging this “bubble bath” and just laughed, completely oblivious to the fact that I had been putting the finishing touches on the scene as he walked into the room. 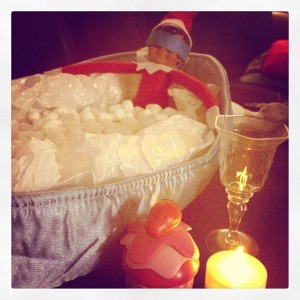 The thing is, it doesn’t take too long to set up a scene. Even the bubble bath one took less than five minutes, and most of that time was just gathering the stuff from my daughter’s random doll junk. Toilet papering the Christmas tree? Thirty seconds. And it’s FUN.

So even if you’re not a parent with children, GO GET AN ELF ON THE SHELF. Rotate nights with your family members or dorm mates or whatever and have fun with it. It’s a great way to get into the holiday spirit, and it’s really neat to watch people react to what you’ve done.

Merry Christmas, and ENJOY this!