Confession: I’ve wanted to read Tell Me Three Things for quite a while (because of the heart shaped waffles on the cover, to be completely honest), but it’s one that I wasn’t able to get my hands on in ARC form, so I (stupidly) waited to buy it and now I’m late for the party. If you, like me, missed it when it first came out… you gotta get it now. 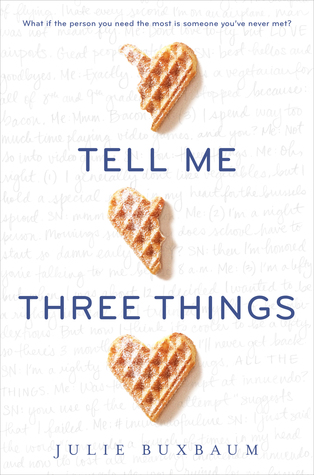 In this, 16 year-old Jessie is trying to figure out life without her mom (she passed away two years ago) and with an entirely new city and step family (her dad moved her suddenly from Chicago to Los Angeles when he eloped with his new wife). On top of all that, Jessie’s now attending a prestigious private school that is beyond difficult to navigate as the new girl.

So, when she receives an anonymous email from a classmate calling himself Somebody/Nobody (SN for short) in which he offers to be a spirit guide to help her adjust to the school, she reluctantly accepts his help out of desperation. When their initial anonymous exchange develops into a friendship, the mysterious SN is still reluctant to meet, even though he clearly knows who Jessie is and they’re developing real feelings for each other. They start asking each other to “tell me three things,” and so these great lists of things are included in their messages back and forth. The identity of SN isn’t revealed until almost the end of the book, and while I did have a good idea of who I hoped it would be, I was guessing until the end just like Jessie was. I was so happy with who it was that I actually went back through the whole book and reread their messages. They just made me happy.

It may sound simple and potentially sad (dead mom, etc.), but Tell Me Three Things is honestly one of the most engaging, emotionally beautiful novels I’ve read this year. It’s NOT sad – Buxbaum’s author’s note made it clear that she wasn’t aiming to write a book about the death of a mom but instead wanted that to be a part of the character’s story – but the way Jessie learns from and deals with her grief is a very real and compelling. The hope she finds in new friendships and eventually in her relationship with her dad is ultimately what the reader feels at the end of the story.

Because I’m a teacher and I can’t turn that part of my brain off when I read YA, I do have to say that I think it’s appropriate for upper high school ages. There’s some language, but it doesn’t feel excessive or showy – it’s mostly coming from grief and truly hard situations. The profanity didn’t bother me in this book like it does in some others. There’s also a significant subplot involving one of the main character making the very grown up decision of whether or not she’s ready for sex. Again, that story line can bother be in some books if it’s not treated with care, but it’s done pretty carefully here, and that’s a topic I wish parents would talk more about with their kids anyway.

It’s been a long while since I’ve read a book that has set in and stuck with me throughout several days like this one did. It feels to me like everything that a book written for teens SHOULD be – not cheesy, full of real life situations, hopeful, fun, relevant, and engaging.

Find Tell Me Three Things on Amazon or at your favorite bookseller. Enjoy!