I know, it’s sad that I hadn’t read Ender’s Game before now. And honestly, I don’t even know why it took so long… I thought it would be more of a younger middle school and upper elementary story, but I was very wrong.

Ender’s Game has everything in it that made me love The Giver. First of all, there’s a futuristic, thoroughly screwed up society. It needs fixing and saving. And Ender, like The Giver’s Jonas, is the one who is called upon to save it.
The action and language are more intense than The Giver, but never in an inappropriate way. It’s tense, and the resolution is unexpected – though I figured out most of what was happening before it was officially revealed to Ender and the reader. It was a fun bit of speculation and dramatic irony for a little while.
Having really enjoyed this book, I have to say that I’m very much looking forward to the movie coming out soon. From the descriptions of everything in the book, I’m thinking it’ll definitely be one to go see in the theater. I’m not sure that I’ll read any of the sequels to Ender’s Game, though. I’m kind of happy with where it ended.
I definitely recommend this book to middle school and up – and there’s a lot here for adults, too. As always, read the book before you see the movie! 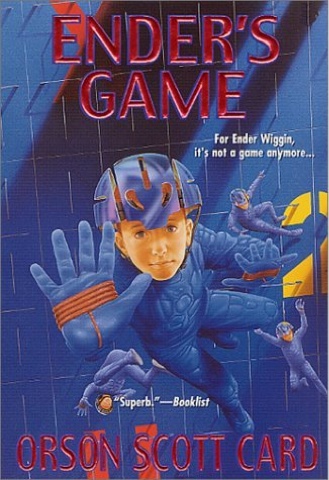